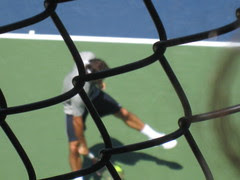 Image by JCTennis.com via Flickr
Photo Evidence that Federer DOES in fact practice his tweener shots!! So Fed has tried this a couple times now successfully and hit the winner.

I think he likes hitting trick shots / magic shots. His favorite player was Fabrice "the Magician" Santoro, who was famous for his two handed forehand slices which Roger admits to admiring.
Watch his reaction in the Gillette commercial when he does the "William Tell" tennis shot. He loves a good magic show I can tell.

He likes to impress the fans with something unexpected. But I personally would not trust ANYONE to serve at my head - not even Roger! =)