Choosing a Tennis Wife: The Hot Model vs. the Pro Player

This is a purely fun editorial piece of writing...if you don't like it, post your comments below as to why (no worries - I'll moderate them later anyway, hehe)

Choosing a Tennis Wife: The Hot Model vs. the Pro Player(TypeB/TypeA)
+ Compare pros and cons of the wives of Andy+Pete/Agassi+Roger

Exhibit A (Andy's wife) - Brooklyn Decker
...ok yeah, after you go look at all the sports illustrated swimsuit pics, please come back... :)

Alright, back? Well obviously she's very hot and probably as close to a perfect 10.  Andy's obvious very proud of her accomplishments according to one of his tweets:

“So happy/proud of my wife… the new cover for Sports Illustrated Swimsuit Issue!!! Unreal… so excited!!!!!”


We don't blame you Andy! Ok, what guy wouldn't be happy? =) *Big ear-to-ear grin by my male audience*

Ok SO WHAT if she admits she doesn't play tennis and doesn't care to learn (video from Letterman); she's a good enough model that I sure wouldn't care.

She can make you forget all about tennis and you don't mind that you lost...in a few minutes.

Exhibit B: (Bridget Wilson Sampras) - Pete's wife [and better half]
Look, lets be honest - those kids aren't getting their good looks from Pete's genes =) 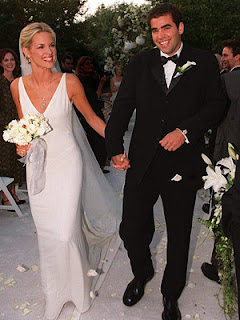 Bridget is a hollywood actress (Sonya Blade from Mortal Kombat and a few other movies since then).  A great mom and perfect choice to raise the family. Seems very nice and nurturing.  Pete doesn't like the fact that critics said he couldn't win a major after marrying her - so he won the US Open in 2002 and retired (told you I could do it).
==

Next: TypeA wives or players who want a mate who truly understands them because they've played professional tennis, know how much hard work goes into it and most of all won't complain that they're spending too much time on the tennis court.

Not as flashy perhaps, but in 10-15 years will probably not matter *that* much anyhow.

Agassi's Wife - Steffi Graf [Tennis Legend]Perhaps the best female tennis player of all time - 22 Grand Slams, and Calendar Year Gold Medal slam...4 majors and Olympic gold in 1988.  No man or woman has ever done this.

She's athletic, smart, and has a strong German personality. I think this was the right choice for Agassi (much better than Brooke Shields, imho). He can still share tennis in his post marriage life (2001+) and won the 2003 Aussie Open.

He describes how lucky he is to meet her in 1999 at the winner's ball in his book "Open".  I think it's great they can share their jobs/lifestyles without compromising.  I hope it's not too much tennis for the kids though!

Agassi has openly wagered that his kids would easily beat Sampras' kids and I would put money behind that one.

I think that some of the post retirement tennis racket sales he and his wife tried to push out with Head had mixed results, but it's great they are still involved with tennis so much.

Exhibit B:
Roger Federer's long time girl friend and now wife (with 2 kids): Mikra
Swiss pro tennis player from the Czech Republic, who retired because of injury in 2002. 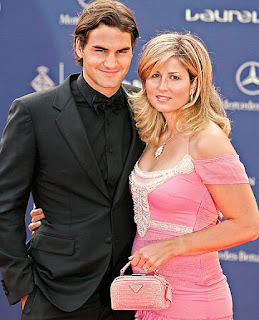 She had known Roger for many many year before he became famous. I think Roger is still over-qualified for so many women, but he's a loyal guy so we applaud him. I don't think you'll find much on her however judging from her wiki entry. So something is to be said when you're identity is mainly as "Roger's Wife" - something that Steffi does not have to worry about.

However, whatever makes him happy I guess - and hopefully he still has the ability to win a couple more majors before doing his swan song.

Finally we have Rafael Nadal - who apparently has a gf in Spain...but of course also recently did a music video with Shakira. Mad props! - even though he looks a little ridged and posed =) Apparently the girl has really good moves and the hips to go with them, so I'd go with it.

Although most guys' knees only get weaker in that spot, somehow his knees and health got better after those few months off and we'd all like to think she had something to do with it right?