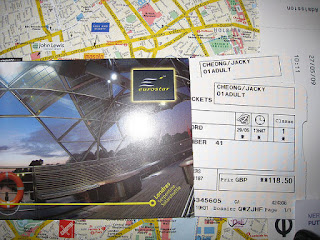 
Taking the Chunnel from Paris, I arrive in London about 2 hours later.

Recommended to me by a fellow tennis coach, I decided to try this instead of another flight - traveling in a business class environment for 30 miles on the undersea rail tunnel.

Personally, I would skip the Chunnel ride as it was not really worth the price over flying. Plus not a lot of scenery along the trip. 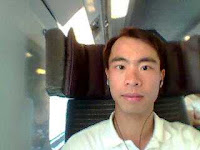 It takes you under the English Channel while seeing the French northern country-side. However, the day trip I took to Normandy on that Memorial Day was definitely more exciting. Sites included Tour stops at Pointe du Hoc, American Cemetery, Battery of Longue-sur-Mer, Caen Memorial, plus Juno/Gold/Omaha Beaches.

Wimbledon: The All England Club 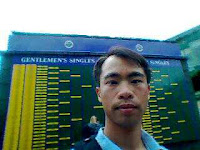 Getting on the grounds was pretty exciting. The day before I had arrived in the afternoon and unfortunately was closed just before I could get in.

Can you tell me how to get to Wimbledon?
If you're taking the Underground Tube, just remember that the closest stop is not the one called "Wimbledon". That is actually just a giant shopping mall nor is it the one marked "Wimbledon Park".
You want to get off at the "Southfields" station:
http://en.wikipedia.org/wiki/Southfields_tube_station. 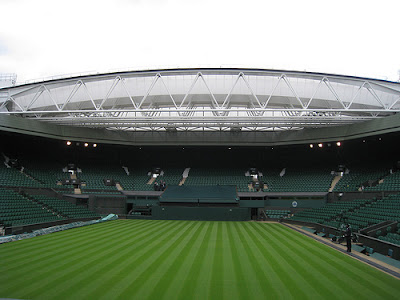 I would definitely check the Wimbledon tour schedule ahead of time. A good time to take a tour is in the morning when the crews are still working on the lawns.

Wimbledon was the crowning star stadium of tennis for me. It is where so many growing up as boys and girls have dreamed of getting to ever since they first hold a racket or watch it on TV.

That year, I was lucky enough to see the center court on the first year that they put up the retractable roof completed.

The Wimbledon Roof Opening took place just days ago I took this picture in late May, with Andre Agassi, Steffi Graf, Tim Henman and Kim Clijsters playing its first ceremonial match of mixed doubles. See the BBC report that actually had Andy Murray meeting with his idol Andre Agassi at that ceremony.

When you purchase your entrance ticket, you can enter with or without the museum option. I would definitely opt to see it, if you have not been before or are a fan of the game/history. It has many amazing tennis artifacts dating back over a century and a half. 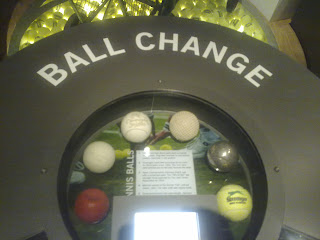 Most Recently when I was there, they added a window display of the clothes/shoes that Nadal and Federer wore during their epic 2008 Final. It was also the last year before the roof was built over center court. 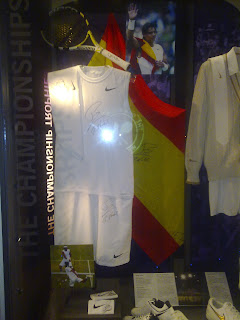 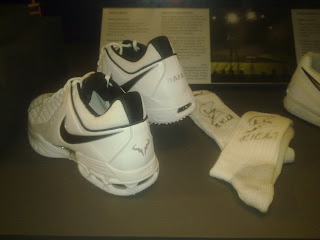 As you can see, my shoe size is a bit smaller than Rafa's =)

Yes, I was lucky enough to bring my tennis clothes, shoes and racket with me on the tour. Getting right there on Wimbledon grass with a chance to hit/serve one ball is a dream come true for any tennis player. 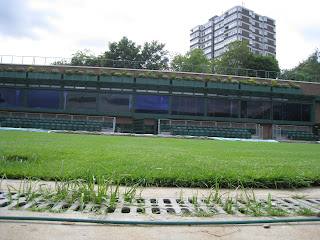 The view along the outside courts was also amazing, especially without all the crowds and chewed up grass you will see once the tournament begins. 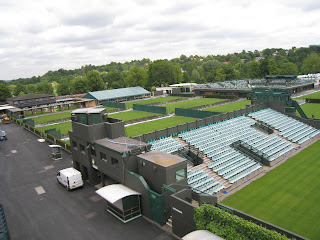 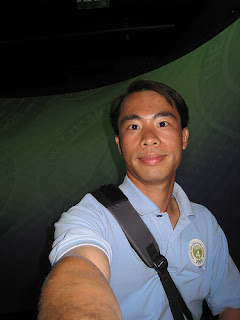 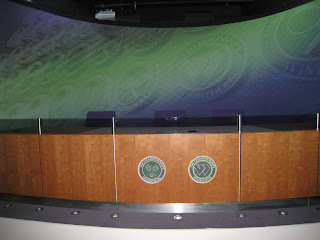 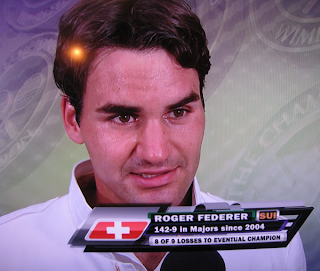 This year in 2012, the Summer Olympics will be held at Wimbledon - using the top 4 courts in the tournament. The Gold Medal match will be held on Centre Court. 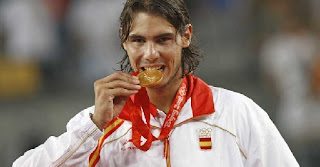 Rafael Nadal is only the 2nd man in history to win an Olympic Gold in singles along with the 4 Grand Slams in their career (Andre Agassi is the other).

Best of luck to Roger Federer plus tennis players all around the world who will be playing for international glory this summer in London!

For more sights and places to see while in London, please see the rest of this article below.
Read more about my Tennis Travels

Exploring the City of London...

I would say that even 2-3 days is more than enough to see central London. Even if you leave 1 day to just Wimbledon, it is more than enough. There just is not that much to do there except museums but I did enjoy a few outdoor marketplaces (Piccadilly Circus).

Taxi's are just really expensive and they will not take Euros. Riding around everywhere in the Underground or "Tube" as they call it, can get you to most of the places you need to be at. 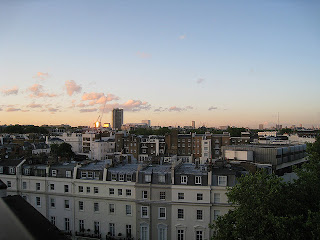 My balcony suite view in Knightsbridge. http://en.wikipedia.org/wiki/Knightsbridge - near Hyde Park (where I went to find tennis courts) and great if you love shopping.

Sheraton Belgravia -
Redeemed for a very good price of $60 + 4000 points per night. In an area that normally goes for 200-500 GBP /night. They also provided a complimentary gym pass down the street.

What was cool was because it was not a crowded week, I was upgraded with my SPG card to one of the two "Executive Rooms" at the penthouse suite level. Great view! Also, this hotel was just about 2-3 blocks from the nearest Underground station so it was very easy to get around town.

When you walk around London, you realize that there is a surprising amount of green space. Hyde Park is located near Buckingham Palace and offers acres of grass to take you through the city - very much like Central Park in NYC.

Tennis in London
Playing tennis there though, generally seems reserved to mainly the club players as I did not see many public courts available.

I also stopped by Wimbledon Park, just outside of the All England Club which had both hard courts and some astroturf courts but had fixed membership or drop-in fees attached to playing there. I spoke to one parent who had a daughter taking lessons from the pro there.

The pro and most players there seemed hesitant to let anyone new play there and declined a friendly match even when I offered to pay for a quick set. Apparently, they have never heard of pick-up games either plus no practice walls I could see. Unfortunately, without better grass-roots tennis organizations, it may be a very long time before they have another tennis champion in the UK.

Here is the British tennis rating sheet and schedule of lessons given at Hyde Park. Notice that the lower the rating number, the better the player...which is the opposite of NTRP ratings in the USTA. 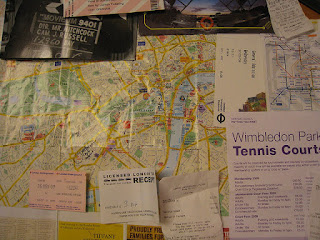 Harrods and British Fashion
Interestingly enough, the Brits actually have many stores that import American brands, as they consider our fashion in style. Ironic that we buy Burryberry and other UK brands for their flare here too.

By the way, it seemed like many of the British women love the sound of an American accent. Not sure why, but was a huge bonus over there.

They have a giant department store near Knightsbridge called Harrods. It even has a dress code and requests backpack holders to carry, not wear their backpack, for fear of knocking over something! 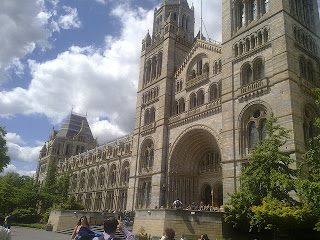 Hmm, I was expecting something grander but maybe I had to go on a tour to get the full effect. However, I was not blown away by the sights there, to say the least. It can be a bit exhausting wading through the large crowds of tourists looking to get their pictures taken. 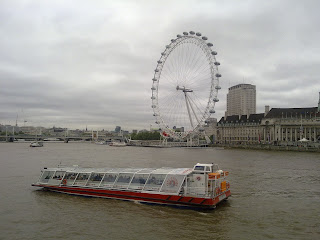 Luckily, it only rained one day while I was there, but definitely check the forecast and pack appropriately! 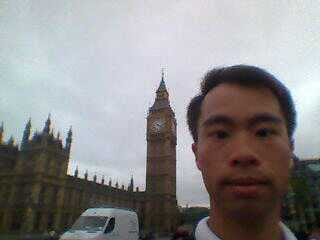 The London Library with original manuscripts such as the Magma Carte was worth a look though.

Also interesting were all the specialty museums that are everywhere, like one for Transportation (trains), Movies and Cinema (movie props from shows), and Science + Natural History museums.


Some things I noticed in Britain 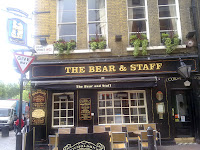 Taxis
Although very interesting to look at, I think getting around in a Taxi is pretty much too expensive (see receipt)...I went about 1 mile and the cost was about $7 - did it for the experience and souvenir receipt I guess.

Bars and Pubs
Almost every day after work, it seems like their entire working population is at the local pubs. They are around every corner and have names like "Fox and Hounds" or "Bear and Staff". I tried some Fish and Chips at one and it wasn't bad at all. They do love their beer and happy hours in the UK though. 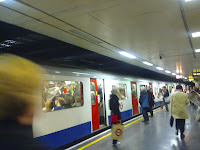 British Underground Tube
Everything in the Underground, including the announcements, was over the top polite - "Please mind the gap", it calls out over the loudspeaker as a subway approaches.

Also, they encourage people to buy "Oyster Cards" or rechargeable fare cards. The card itself costs money too, and unless you really want it for a souvenir, I would skip it.


In the future, I plan to visit a few more of the grass tournaments:
Queen's Club, Halle & Stuttgart - possibly before Federer retires.
I was fortunate enough to see the Hall of Fame tournament in Rhode Island and attended the retirement ceremony of Andy Roddick and Kim Clijsters!

Read more about my Tennis Travels

The Roadmap to Rafa - Summer in Europe