The next stop by Train from Madrid was to the beautiful beach city and home of the Sanchez-Casal Academy (one of the best tennis camps in Europe).

I wanted to investigate for myself the city with so many special memories and meaning to Nadal's humble origins in Spain.I enrolled for a week alongside other tennis professionals at his former academy of the Sanchez-Casal in Barcelona for a week. In the afternoon, I would watch the new tennis teachers' training.
To truly understand someone I knew, could only be done by walking in his shoes...
Only by sweating on the same soil as the young master could I truly understand his style, his influences, and development as a player starting out.
A decade later, I would return to this city for the Barcelona 500 but nearly ended my trip with a serious accident on day one...I would earn my red badge of courage in 2019.
It is said when you run with the bulls in Pamplona and get injured, the Spanish medics that treat your injuries will record your name into a medical entry book. Rafa is clearly the strongest of all Spanish bulls - it's good advice to be prepared mentally and physically well before entering into his ring.

Commuting to the Academy

After quickly showering and changing, I grab my tennis racket and just a small bag.  I start walking from my hotel (the closest one to the Academy in the airport district) over a sky-walk to the Academy. Waking up early before the sunrise every morning, I hurriedly ate my continental breakfast - smiling to the front desk receptionist, I repeated the only greeting I can remember from elementary school Spanish, "Buenos Dias" I greet her."Good Morning, sir.  How are you today?" she replies politely.  Smiling either at my best attempts at a Spanish accent or because she knew I was American as soon as I got down the elevator by the way I was dressed. Somehow I knew I would run into her again...
A few cars and buses with the Sanchez-Casal logo pass me by, as I continue down along a long but narrow dirt road alongside a farm.  A small stream beside the road separates it from a field of crops.  "This was the closest hotel to the Academy?" I think to myself.

In the next few days, I would meet young junior (German, American, Spanish) ranging from the age of 5 to those 17 - every one of whom has dedicated their lives, study, and their family's time/dedication toward seeking a place in professional tennis.

It is both a school, a tennis camp, and a meal ticket for most of these kids to an American University scholarship. 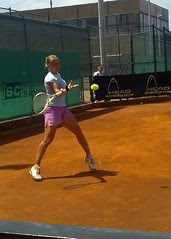 2009 French Open Women's Champion
Coach Dani
While training and studying the "Spanish-system" of footwork and clay from an Argentinian coach who calls himself "Daniel" (or Dani), he points out a young lady slightly younger than me.
Her mom comes over to ask us to borrow some singles sticks. She also was using the Head Instinct yellow racquet (Liquidmetal Instinct).
French Open Champion I've seen her every morning and somewhere before and knew she must be pretty famous. She was very immersed during practice with her coach and mother.
Less than a month later, she would be destined to become the 2009 French Open woman's champion (Svetlana Kuznetsova).


Read more about my Tennis Travels

The Roadmap to Rafa - Summer in Europe