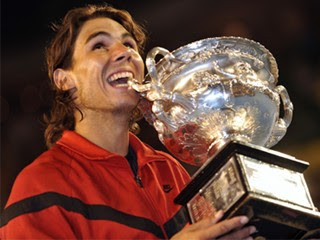 Tennis God - of Mind, Heart, Body
Nadal just never gives up. He plays every point as if it were match point. He shows courage in the face of overwhelming odds and a fiery passion for making clutch shots. He's learned to adjust his game to win on every surface. Whether it's his serve, forehand or volleys...he's always improving, tweaking every facet of his game to get to the winner's circle.

Even with both knees wrapped in tape from all the tough running he puts in, Nadal still has a way to win. He is not one-dimensional, but rather self-adapting - relying on much more than strength and speed to overcome.

Against the red-hot Verdasco who put up 95 winners in the semi's against Nadal, his iron-clad will never relented as he fought on. When I watch him play at the Queen's club on grass against a barrage of Aces and service winners by Ivo Karlovic - all he needed was those few key points in the tie-breakers to win.

For Fed, unfortunately, he will not reach 14 slams for a while. In the final set, it looked as though he was defeated...both mentally, physically and finally emotionally at the podium. It was very considerate of the much younger Nadal to express so much empathy and consolation to a rival who quite frankly expected to be the big favorite going in. Humility and dedication to the game is definitely with Rafa - a true deserving champion of the sport.