The longest tennis match in history 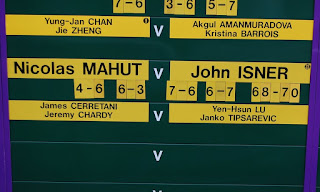 (Jun 22-24, 2010: Wimbledon Court 18)
America's John Isner vs France's Nicolas Mahut
Ok, so everyone in the world probably heard about this game. I saw ESPN's front page go from World Cup coverage to reading "To Infinity and Beyond!!". It is absolutely incredible what these guys accomplished on the tennis court and will never be repeated again....

I actually attended the same Saddlebrook training academy in Tampa back in '06 that Isner credited for toughing him up to go the distance: http://www.youtube.com/watch?v=j95b7U3bOgY#t=1m33s

Believe it or not, pro tennis players actually "over-train" for extreme situations like this. As Sun Tsu once said: "The more you sweat in peace, the less you bleed in war"

But from my perspective, it looks as though the Wimbledon surface has been lending itself to many more holds of serve. Look at the Roddick-Federrer final of 2009 that went 16-14 in the 5th set. This was the longest Wimbledon final ever with 77 games. In 2010, I also recall seeing an usually high number of 5th set going extra innings for the just the 1st round alone.

I feel like this new grass must have something to do with this. It puts the servers at such a huge advantage that you will not see very many rallies. I would personally like to see some more serve-volley play come back to Wimbledon.

Grand Slams are unique because they are best of 5 and should not be diluted because of time constraints.

However, I am not in favor of changing the tradition of playing it out in the 5th set. If somehow it was to change to a tiebreak, I would insist on a super-tie break (best of 10, 15 or even 20 points), but Grand Slams are unique because they are best of 5 and should not be diluted because of time constrains. The US Open is the only GS with a tie-break at the end of the 5th set and it is such a narrow margin to determine such a large result.

Isner/Mahut will live on into tennis immortality because of their feat. I just hope that Mahut will be able to recover from such an epic match.

In my own career, I have played probably a dozen best-of-5 tennis matches. The only one I vividly remember is the one I lost 6-4 in the 5th =P. I just am blessed that it was not 70-68...as I would have probably gone insane :-)