My Last-Minute Journey to the US Open Final 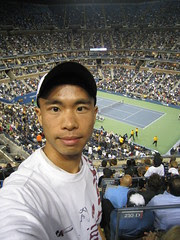 JC at US Open Final
Originally uploaded by JCTennis.com

US Open Finals on Monday

For the last few years, I had talked about possibly going to see Nadal...if he ever made it to the US Open Final. On Monday around 3 pm, I finish work early and went to DC National airport to see if I could get a standby flight to Laguardia.

For $40 and 25K points, the ticket agent told me I could get one of the last Delta Shuttle connectors available (with a round trip flight later that night).

Let's do it! - I thought, how often do you get to see someone achieve their career slam?

So I literally boarded the plane just minutes before it left the gate (they announce my name over the PA system as I sprint to the gate).  The whole time on the flight I am just imagining what it will be like to see Nadal at the final winning the career slam. I'm a bit nervous that Djokovic is one of the few players that have a strong hard court record against nadal plus an extra day's rest from the rain delay to recover could make it tough against him.

Life is either a great adventure or nothing.
- Helen Keller

My plane lands around 4:30 and I jog out of the gates and take a $15 taxi ride to the stadium.

Of course being a spur of the moment decision, I had not gotten a ticket in advance. But when I got to the box office, I found out it had actually sold out! Walking back to the board walk, several individuals approached me as I saw they had cash in their hands.

Tickets! Get your Tickets here!

Looking back - the safer way and easier way to get tickets I learned later was to buy it from TicketExchange here. But unfortunately, I had left before I had a chance to get them online. Ok, I thought, a scalper...they definitely have an extra ticket. Unfortunately, it was another fan asking me if I had an extra ticket.

I walked all the way back to the entrance bridge and saw at least 5-10 people asking the mob of fans just departing the 7 train if they had extra tickets for sale! I was in trouble... (read the rest of the story here) 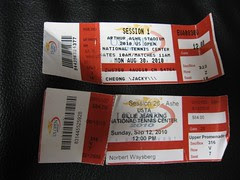 Still at the boardwalk...

20 minutes later, I finally found someone who had an extra ticket. $200 he said* I saw that the price on the ticket was actually $84. So I haggled him down to $180, and then proceeded to sprint to Ashe. It was nearing the end of the first set and Nadal was a break up. After climbing up to the Everest that is home to section 317 row V seat 8...I managed to watch Nadal win the first set. The view wasn't terrible and there was a very cool Latino couple there sitting next to me - they told me how they had waited all day Sunday for the rains to stop but were back today to see the conclusion.

After about 1.5 hours later though, I felt a few raindrops on my hand - then watched an ominous dark mass of clouds pass overhead... The couple next to me had already started walking down toward the exit. They already knew what was coming; just a couple mins later, the raindrops turned into spitting sprinkles and then turned into pelting rain drops all around. Play was suspended and it was all the entire stadium was told to evacuate because of threat of Thunder and Lightning - #@#%$! 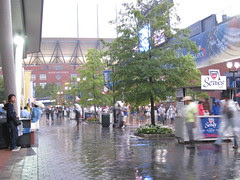 Making a Decision - go or stay

It was around 6:30 when it started raining and I prayed it would end quickly so that I could watch the end of this match - just 2 hours before my flight back to DC. I strolled around Armstrong, Grandstand...7:00...7:30 - a message on the boards and the announcement over the PA was that the storm was expected to pass in less than 1 hour. I went to the concession stand to pick up some chicken fingers for dinner and was about 30 mins worth of waiting in line. Trying to keep my head under cover as best as I could, I finally put on my rafa hat and put on the Sanchez-Casal t-shirt over top to keep an extra layer and stay warm. I knew I should have had brought a sweater or a long sleeve shirt but there wasn't much time to prepare.

Finally around 7:45pm people started filing back in. So at this point I either have to go back to the Airport and go home - or go back to the match and figure out something later. I decide with all this money on the line, I have to watch the rest of this match! I go back in.

Around 8pm play resumes from 4-4...but Djokovic proceeds to break and hold - winning the second set! This is going to be a 4th or 5th set match (basically they would play a best out of 3 match now).
I also noticed that many of the lower promenade seats were now vacant...apparently they did not have the stomach for 2 days of rain delays. In the 3rd set, I look around for a better view - I find one close and in an area of fellow young rafa fans =) I meet another couple, these a bit older and asking me questions about what the little red tennis ball icons mean. I explain those are challenges remaining and tell them a little about the styles of Djokovic and Rafa's chase of tennis history.

They seem to want a better match so they are pulling for Novak and I respectfully clap along with them, but deep down I want Rafa to beat him down.

Closing in on Tennis History

After some amazing 20+ shot rallys, Rafa finally wins the 3rd and starts to run away with the 4th set. The camera light bulbs start popping everywhere in the stadium as the final game came to match point. Everyone is on their feet now - I hear cheering and jubilation like a soccer match...the shots of Ola! and Vamos Rafa! fill the stadium. History is made. Nadal has done it - he is now the youngest ever to complete the full slam at the age of 24! 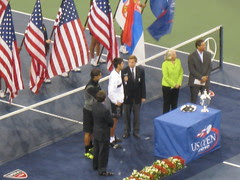 When I leave the grounds around 10:30, I decide to take the "48 bus" to get back to LGA, by the recommendation of the transportation folks and because the taxi line stretches around the corner. But it takes almost 30 mins for the bus to get there - by an incompetent driver might I add who doesn't understand his route is suppose to loop every 15 minutes...I finally get to the airport but it is 11:30 by now - all the departure flights are gone.

I have to either take the 6AM flight the next morning or get to Mid-town in Manhattan to go with a train/bus if I want to go home...both those options will take around 4 hours...so I decided I'll camp out and take the first flight home.

The central terminal was nice and bright - I made camp in the food court where I find several other young travelers also settling in. I even meet up with one guy who had just come from a week at the US Open and headed back to California.

We make light talk for a while before I decide to try to lay down for a nap. But after 1-2 hours I wake up around 2-3 AM and start walking around, unable to sleep and looking for some food. I find a 24 hour cafe at the other end of the terminal and have some pastries and a bottle of juice...an early breakfast. But as I try to go back to sleep I can't - maybe uneasy that I will oversleep or just not accustomed or unsure about my surroundings.

At about 4:30 I head over to the "Marine Air" terminal - I have to take a Route A bus to get there and wait another 20-30 mins before it arrives. I meet a young Indian who works for McAfee in California and we chat for a little while - he is very pleasant and we exchange contact info. 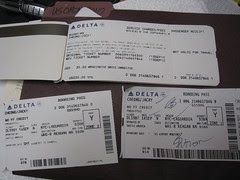 At the Delta terminal, the employees start filing in around 5:00. They all walk into a small back room and pretend not to notice the growing line of customers at the front desk. Nobody comes out until about 5:30 - the indifference they carry themselves pisses off several of the customers in suits. I'm there completely out of place still in my S-C shirt and Rafa hat. They put me on the 9:30 AM flight but luckily I am able to talk myself into getting a standby for the 6:30.

After waiting for all the passengers to board, I am able to get one of the last few remaining seats.

Exhausted, I sit at the very back row and after sinking into my seat, I sleep almost the whole way home. I made it...I get back to work that morning and share my journey with my co-workers. Unbelievable that luck was looking out for me and made this once-in-a-lifetime trip possible at the last min.


Wrapping up a long 18 hour trip

Rafael Nadal attained Tennis Immortality that night - and I am one of only about a few thousand mortals blessed enough that I was able to witness it. Next stop for me...

The Road to Rafa's Renaissance