Denis Kudla of Arlington, VA: the next US Tennis star?

Denis Kudla of Arlington - so I saw on Tennis Channel the other day, a show called "Who's Next". He made it to the US Open Boys Championship! Kudla was also in this year's Legg Mason qualifiers, making a great run for just his first year on the pro tour. 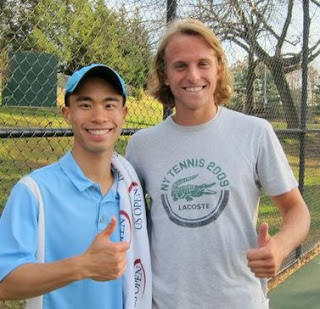 The show was about junior rising stars in America who hopefully can help the USA reclaim the top spots in international Tennis. Without Roddick and Blake as the flagships of US Davis Cup, it will be a challenge finding the next prodigies. The main junior featured in the program is a young 18 year old named Denis Kulda, who hails from Arlington, VA.

As a local DC native, he has been able to balance a heavy tennis training program (at the College Park, MD USTA development program, TCCP) while not joining the mass herds at places like Bollettieri. I really respect his family's decision to do that. Arlington has a great education system with which I am intimately familiar and proud to have enrolled. Also Denis has a chance at a normal childhood, which I think former pros like Agassi will tell you, they would trade anything to have back.

I also have the privilege of hitting with his brother Nikita, a senior at UMd and terrific at architecture. We are in the same USTA flex league this season along with our mutual friend Mike.

I have been trying to find better singles players out there to help improve my competitive game without breaking the bank at tournaments around the country - there is actually a Australian Open qualifier's entry tournament up in Rhode Island this weekend but I decided against it, considering I had to work all Fri and Sat.  But that would be one heck of an opt to go down-under with the $3K+ flight covered!