Nadal and Federer in Miami SF's (First Rematch in the USA after 6 years!)

Update:
The match-up looked very much one-sided, unfortunately. Commentators compared it to a heavy-weight title fight with a 2nd round KO. The court surfaces that Federer has the edge on may now be limited to indoors and perhaps grass (for lower bounces). Nadal's high kicking groundstrokes to his backhand seem to be too much for Fed to handle. 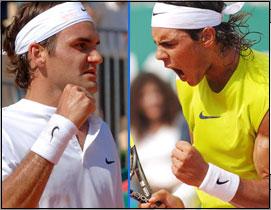 His forehands were not bad, but also did not do enough damage to Nadal's defenses. In the end, Roger made around 40 unforced errors the whole match, perhaps going for too much when he was behind in the score.

Let's look and see how the Nadal v. Djokovic rematch final plays out this Sunday. If anyone knows how to end a champion's epic winning streak, it's Nadal...just ask Roger =)


Friday 4/1/11 - Prime time (7pm EST) Federer V. Nadal
Rafael Nadal secures a spot in the semi-finals after playing a long hard 3 set match against Tomas Berdych. Federer made it through with a walk-over against Gilles Simon with only 3 games played.

Will the extra rest help Federer? Last time the two met on a hard court in the USA, was also in Miami but in the 5 set finals where Fed came back from a 2 sets and 1-4 deficit in the 3rd. Fatigue was definitely a factor that time.

Hopefully with a fully motivated and healed Nadal, this should be the match that all tennis fans in the USA have been waiting for. Get your popcorn ready, this is going to be a good one =)