ATP 500 Final (the Rematch) - Barcelona Open 2011
Ferrer and Nadal are set to duel in the 2nd consecutive clay court final for the second Sundays in a row. Both are well known in their country, as the #1 and #2 Spanish players currently. Nadal won 5 years in a row 2005-2009, only to have skipped last year in order to rest up and prepare for the ATP 1000's. The good news is that he'll have 500 extra points to earn if he wins to increase his lead over Djokovic. 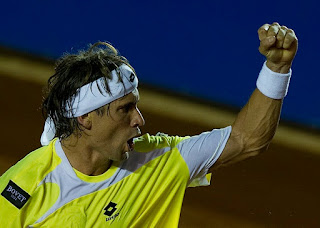 Ferrer, also known as "The Warrior", will need to square off against Nadal - nicknamed "The Gladitor" by ATP commentators.

Perhaps aptly so - as Rafa has spent so much of his career dominating the Clay; as Spartacus would have in the Roman Colosseum. Tennis players have swapped swords for rackets, helmets for hats, headbands...the fans' applaud and the roar of the crowds echo their encouragement on their heroes in the tennis center arena, as they would in the gladiatorial games in ancient Rome.

Recording his 500th Career Win today, Nadal seems to be on his way to another clay court sweep. He is sure to be remembered in history for a long, long time.

There is a saying that "in order to be able to be successful on clay is to be able to endure suffering"... Early in Nadal's career, he learned to enjoy it.

As Ivan Dodig can tell you, playing on clay can make for a very dirty day for laundry. Of course, it can also leave you bruised and battered simply because you were paired opposite against a man named Nadal.

Tennis Training in the City of Barcelona

For those who are interested in learning some of the Spanish tennis taught to the likes of Nadal and Ferrer when they were young, I would recommend visiting the Sanchez-Casal academy in Barcelona.

They have special programs for both Coaches and Adult Players, year round that includes transportation to and from the city of Barcelona. Makes for a great vacation for any tennis fan/player out there. I'm no stranger to the Barcelona clay, having spent nearly a week training at Sanchez-Casal in 2009. The weather is generally perfect in late April-June in Europe.

The city is vibrant in its culture and architecture with beautiful beaches and friendly, photogenic people all around. The fans here love celebrating Sport, whether they be the victories of great champions of soccer or tennis. Their appreciate victory after a hard fight with spirited passion under the day's sun and celebrate long and late into the night while enjoying their wine.

3 Important tips for Watching the US Open Live!

- My Tennis Life with Chase