Congrats to Spain Reaching the Davis Cup FINAL in the last 4 out of 5 years!

Although they were just 1 match short of another championship, the Spanish Davis Cup team played very well on a fast, hard court, which is the complete opposite of their favorite red clay surface.

David Ferrer lead the charge for Spain, with his strong work ethic and determination. Even at just 5'9, he puts every ounce of effort into his play, just like Nadal. Also they have a cast of young players Marcel Granollers and Marc Lopez who also developing to be one of the world's most dominant doubles team! In fact, they just won the year-ending ATP World Tour Finals in London last week!

This is a Nation of strong tennis players, even with Nadal absent they are so strong. (ESPN Article) They won another Davis Cup on foreign soil in Argentina just a few years ago. Spain has become a Tennis Dynasty for over a decade now (they are the Lakers or Yankees of Tennis). So how can their tennis model help us improve our own game in the USA?

So why not learn from the best? 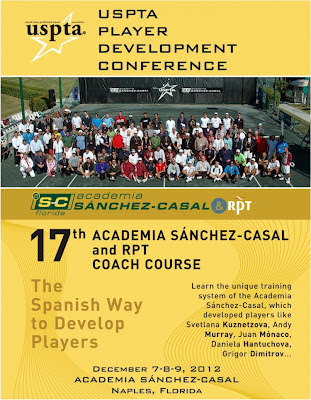 Luis Mediero and Emilo Sanchez (former Davis Cup Captain for Spain) will be your instructors. The weather in southern Florida is usually almost perfect in December.

If it worked for Andy Murray as a junior, it should help your students improve too.

Understand progression training, build upon the "X" and "V" Attack-Defend Patterns and Footwork Drills. Learn how to bring a winning tradition to your own team/club.