After flying half-way around the world to watch the Aussie Open in January...

In 2020, I decided to go check out the Indian Wells BNP Paribas tournament again for the 4th time. It will be the most appearances for me at any Masters 1000 event from 2013-2020.
Update: Unfortunately, it was cut short this Spring, but I was still able to watch the Oracle Challenger Event on opening weekend and visit Joshua Tree and the Palm Aerial Tram again.
It will be postponed or rescheduled until later in 2021. The Aussie Open will begin in February to accommodate a 2-week mandatory quarantine for all players.

Below is a quick preview for our fans who want to plan ahead a trip. Plus a look at what has improved and any changes you should expect before heading here!
All Top Players show up at this Tournament
The Top 49 out of 50 showed up in 2013! You get to walk right up to the players practicing.

At matches, you get to watch from close seats that you would otherwise pay over a thousand dollars to see at the US Open*

All while meeting some terrific fans and tennis stars up close and personal.

I had unused frequent flyer miles I needed to burn before they expired...so I flew to San Diego and drove 2 hours over the very scenic, snow-feathered Rt. 74 (Pines to Palms Hwy) to get there. The Big Horn winding road area looks like something straight out of a racing video game. 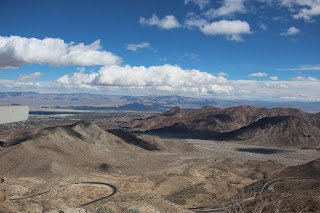 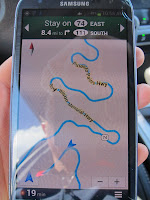 I landed a great AirBnB place that included 2 private tennis courts, pool plus hot tub. More recently I stay at a private home 5 mins walk to the Tennis Stadium to avoid parking hassles. Lots of hiking trails near Joshua Tree too. Coachella is just around the corner for music lovers. 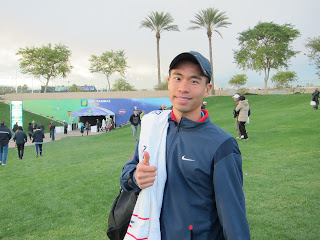 The local hosts are awesome with a lot of Indian Wells knowledge and there were a couple other tennis fans staying in the other room too, so it was definitely a great place to stay (much better value and cozier than a hotel room). Make sure you pack a jacket though because mornings can get a little chilly. 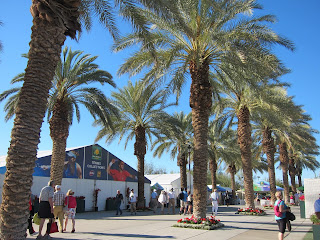 It contains the 2nd largest tennis-specific stadium in the world - only behind the mammoth Arthur Ashe Stadium. It's a great view of the NYC skyline but where you could actually get a nose-bleed if you climbed all the way up to row ZZ! 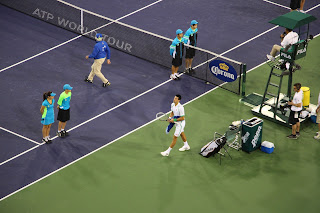 The Indian Wells Tennis Garden has some of the best practice court viewing for tennis players up close. I would say it is probably the closest you will ever be able to get down a near court level view of the players just 10-15 feet away.

General Parking was one thing that could definitely be improved with the 2000+ spots at the new grass lot as the way it was this year.

If you got there 1-2 hours after opening, it felt like Rush Hour traffic. So arrive early or Uber! 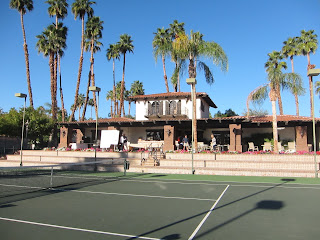 Networking and Playing Tennis in the Desert -
Monterey Country Club
Dan Nabedrick (Twin Cities Tennis) runs an annual Tennis Tournament during the Indian Wells pro tournament in early-mid March every year.
Dan's friend Jo from Michigan actually was nice enough to invite me to play as a sub on his team.

It was a beautiful location, and Dan does an awesome job throwing the party's dinner party (at his private pad with his family).
He manages the Herculean task of running all the logistics on the 15 court facility. Great event, highly recommended! Super grateful as he's a great guy, tennis connector, with a wonderful family.
Recently in 2017, they have moved to the tournament championship to the Palm Desert tennis club.
I assisted as a "guest pro" and hitting partner with some of the guests. I even hit with the owner of the tournament's tennis windscreen manufacturer on the stadium court.  Lots of doubles, but occasionally you see a few singles specialists too. Fun networking event and evening parties. Lots of good sushi in IW.
Ian Westermann and the Essential Tennis have also been there several years giving his private VIP clinics. Kirby and Ira were great fun in 2017. Met Kevin and his wife in 2018. Nice ET family. 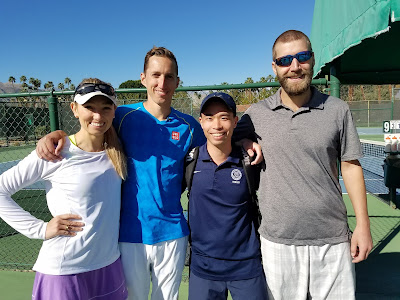 The Who's Who of Indian Wells - BNP Paribas Open

Love these annual reunions. This is a super special treat for fans.
Some familiar names here at these tennis conference meetings out on the grass. 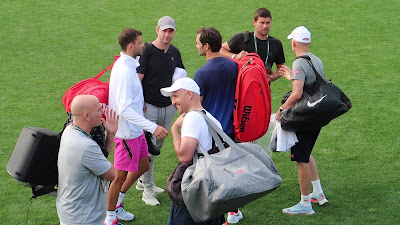 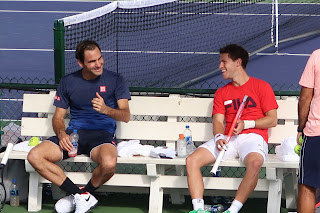 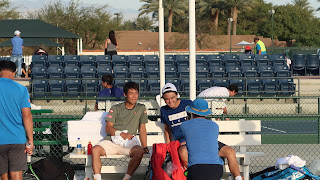 Tommy Haas - the new TD has his family up in Sacramento. He does his best as the new tournament director to coordinate this event every year. Worthy Charities including the Eisenhower Health fund, where Rafa and Friends raise money. In the past, it was Hit for Haiti and other aid relief for natural disasters with Agassi and Sampras. 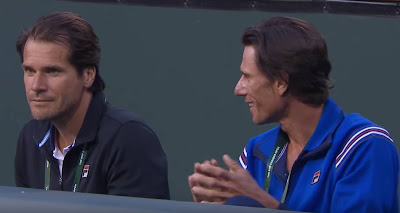 Tom Fey (the guy waving) is the local court organizer and puts folks in the wild card tournament and sets up the ATP Challenger event that occurs just prior to Indian Wells. He's always running around, super busy on the grounds with draw sheets and schedules. 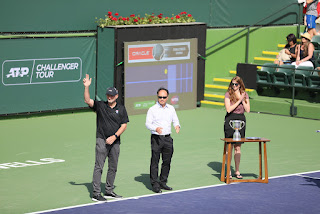 He has offered to set me up to be a hitting partner and once to put me into the #13 spot for the men's 256 draw to sub in - but for one reason or another, I have never taken him up on it.
Michael Chang - my personal hero and the legend of Asian American tennis!
Finally caught up with him and his brother in 2018 - travels with Nishikori at the big events. 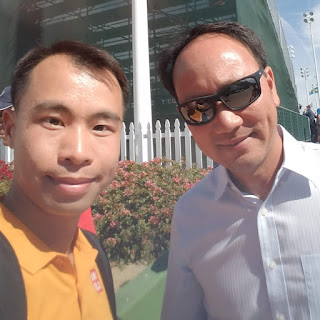 Larry Ellison and his Oracle Team
Perennials at the tournament as the new owner. We're so used to seeing him and his daughter sitting center stage on TV. He loves watching the matches. 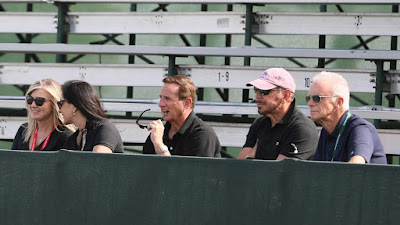 New bigger stadiums, hawkeye on every court, and lots of money invested into the Oracle Challenger Series. Qualifier weekend is perfect to see the warmups and pros before the huge crowds.
The Oracle World parties in SF at awesome - they bring some of that tech energy into SoCal.
In some nostalgic ways, I still miss the classic Charlie Pasarell days of the Pacific Life Open too :)

We were able to giveaway to a couple lucky fans of Tennis-Bargains.com some freebies too!

Just like at the Aussie Open and US Open, we offer our loyal supporters a way to enjoy great tennis seats, even when the box office is officially sold out =) 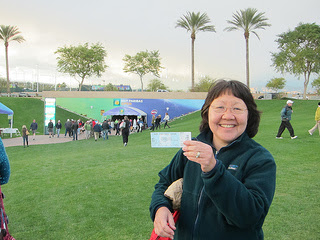 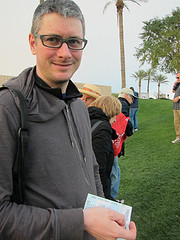 USTA and WTT Leagues
Another great way to play at the Tennis Garden is to compete in the USTA Nationals Tri-Level competition or the WTT (World Team Tennis) Rec League which gets to actually play on the same (practice) courts that the pros used during the tournament.

The newest stadium features a 19,000 sq ft structure with 8,000 seats (roughly half the number of the main stadium). Right now the best general admissions seats are probably on Stadium 2 and 3 for the marquee matches.

However, with record-breaking attendance this year - it was especially hard to navigate around the large crowds on the middle weekend when both Saturday and Sunday morning sessions were completely sold out.
There are still some tickets left for the 1st and 2nd week:
Indian Wells tennis tickets online