Traveling for Tennis is how I discover Joy, Adventure, and Cultural Diversity.
Fans and players alike can enjoy the city and culture of all the international destinations, especially one so close to the USA.

Visiting Montreal for the Candian Masters had been on my bucket list for many years. I remember a very frosty Toronto during Christmas as a teenager through Buffalo, and then most recently had the pleasure of touring Vancouver the year prior byway of Seattle by train.

Montreal in the peak of summer seemed is the perfect escape from a hot, humid East Coast for relief. I visiting anytime between July and October. A vibrant, historic city to explore even outside of tennis. 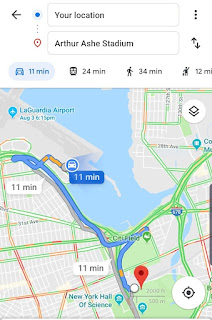 US Open layover
On the way to Montreal, I had a short layover at LGA (US Open). This was the same flight path I took in 2010 on a Monday after work to catch the US Open Final.
After an epic rain delay, I and several hardcore tennis fans stayed overnight in the airport in order to witness the epic conclusion of Nadal capturing his career slam.
That year's finale between Nadal and Djokovic was not fully shown in its entirety, as its conclusion clashed with the NFL's Monday Night Football opener in America. Some of my untelevised memories of a lifetime.

Flying next to a Pilot

On this most recent trip, I had the fortune of sitting next to and chatting up a young pilot on my small plane up from DCA to YUL via LGA.

She told me about a "positive space" policy or flying deadhead for work, where fellow airline pilots can sit in the highest class, unoccupied seats available! We chatted a bit about favorite international destinations, best/worst airports, and our ways of flying friends for free.

I arrived at the US/Canada terminal - my 2nd time in just a few months. The previous long layover was when returning from Europe. At that time, I had not had the pleasure to go out to see the city of Montreal (plus it was still cold in May).

When faced with at least 4 hours of time, I typically make an attempt to make a "layover sprint" to collect a few memories, photos, and enjoy a warm local meal outside of the airport. 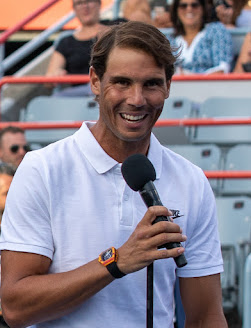 August 2019: I was thrilled to be accepted again as a Media Journalist and Photographer for coverage at the Canadian Masters 1000. Always excited to make plans to see international tennis and new destinations.

The press staff was very nice, courteous, and professional to me as a first-timer - an exemplary example of friendly and inviting Canadian culture.

This was also a very historic year - the tournament's 40th anniversary with the original tournament director plus a special ceremony featuring Rafa Nadal and Amelie Mauresmo in attendance.

For Tennis Canada, this is their US Open pinnacle moment. Stars such as Shapovalov, Raonic, Pospisil, and Bouchard are heroes to their fans like the NHL stars.

Now with Grand Slam winners Andreescu (US Open Champ) and bright talents like Felix (FAA) in the top 20, it's a very bright and exciting time for young Canadian tennis fans.

Culture and colors of the IGA tennis stadium

A beautiful Canadian city. I found young people picnicking on the grass, soaking in the sun's summer rays for a few brief weeks in the summer.

Completely immersed in French culture from the bi-lingual signage to strangers asking if you speak English or French before addressing you.

The "Little Italy" neighborhood a very quaint little village rectangle just a short walk from the tournament site. Cute boutique shops with public markets like Jean-Talon plus old churches and murals dot the way to the tournament.

I wanted to experience traditional Montreal for a few days.
I always prefer to be within walking distance of the tournament site and go car-less. Just take Uber when I must and take some public transportation like the locals. A very walkable city indeed!
Complete with a full kitchen, patio, and a full vinyl collection of record in the living room. The apartment was a duplex on the middle floor.
The wooden floors creak a bit of their age from many cold and hot periods, but it was a very traditional Montreal home.

The Sights, Sounds, and Tastes of Quebec

If attending the Montreal Masters, I recommend going out to site-see during the morning. Then for the tennis tourists, enjoying a bit of tennis during the afternoon. Finally, one can alternate an evening stroll by Old Montreal with catching an evening tennis match or authentic meal (players like me on a diet must try hard to avoid the tempting cheezy but savory Poutine snack).

With so much to do, it is advisable to spend at least 2-3 days to soak it all in.
Mont-Royal is a must-see when you first arrive, but be sure to start at the TOP (via Uber) and walk down from the summit. Many made the arduous mistake of climbing up in the other direction during mid-day sun which is quite a hike.

If it gets too warm, Pointe-à-Callière, the History Underground Museum is a perfect place to cool off or just beyond the tennis grounds, one can enjoy the rare summer picnics out at the grassy parks nearby.
On a nice weekend, check out the Jean-Talon Market or take a longer trek through Chinatown. Within walking distance is the prestigious McGill University. It is nearby the waterfront and great for enjoying culinary delights (more photos below). A small Japanese friendship botanical garden is also not far away.

My Ranking of Top Montreal Sights for Tennis Fans to Explore

Mont-Royal offers an impressive view of the entire skyline and city. The giant cross at the summit is a very historic monument symbolizing that it survived a great flood that almost destroyed the city.

Dating back to its founding roots, the city represents a peaceful unification of the French with the various surrounding Native American tribes. 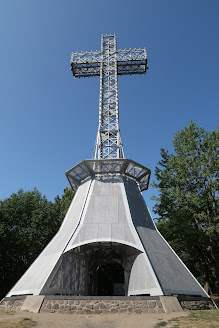 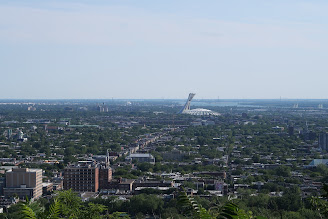 The 1976 Olympic stadium site still stands large in the distance. Fans are very big supporters of their Montreal Canadians or Habs fans - "Les Habitants". The original settlers from the 17th century.

A beautiful sunset destination. The spacious boardwalk, the yacht club, and European Architecture abound. It's all wrapped together with a summer carnival-like atmosphere at night near the water. 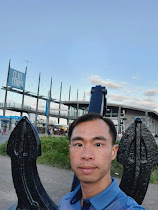 A city of grand churches, this one is the centerpiece for Montreal.
A quick tip: I recommend visitors have Canadian dollars ready before entering. There's a steeper 50% exchange rate if you provide them US greenbacks. Take a respectful walk around inside and appreciate the beautiful stained glass art. If you're really lucky to come at the right time in the morning, you can be present for one of their majestic services. 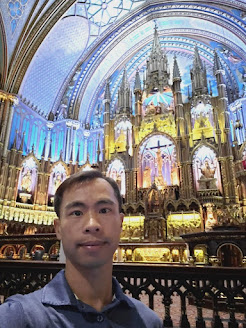 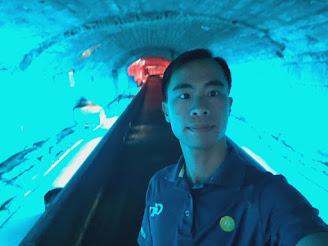 This historic underground museum was another hidden gem I would definitely recommend checking out.

Every 15-30 minutes, the virtual stage tour gives the audience a very memorable multimedia experience showing off the rich eclectic history of this city.

As you climb down through the lower levels of the catacombs, it reveals the rich preserved layers of Montreal's past.

It's a very interactive experience and great for the whole family. Allow at least 2 hours to go through all the areas and try to sit on the left side of the stage to exit quickly to the main exhibits.

The Mont-Royal Cross we saw earlier is the centerpiece in a video near the last exit.

Tam Tam Drummers - performances every Sunday at Mont-Royal. One of them rode the metro back home and I noticed his signature beads and well-aged instrument. It is a great community of musicians and fans in the public space.

Walking distance to the Tennis Stadium, this public market is a charming area to go for a nice breakfast before the first match.

Be sure to try a few locally grown farmers' goods to buy as snacks or to cook later.
Plenty of flowers and wide open stalls of anything one could want to check out in a public square market. Lovely to walk through and see the children on their way with parents to school.

Delicious. A good place to go when you're hungry. I booked a food tour and was pleasantly surprised even though I've been to many Chinatowns in the world before. 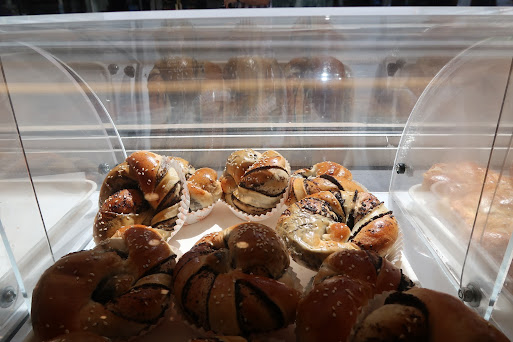 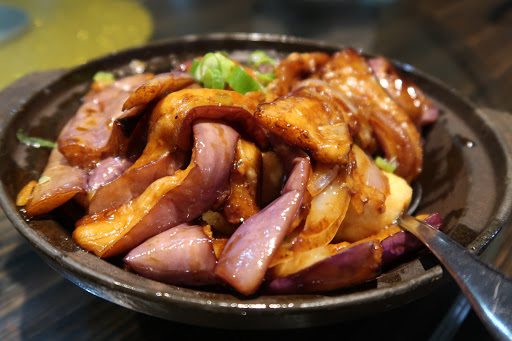 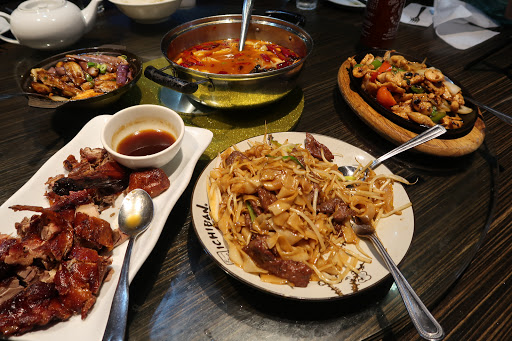 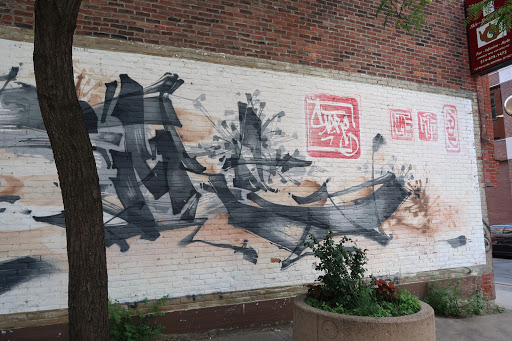